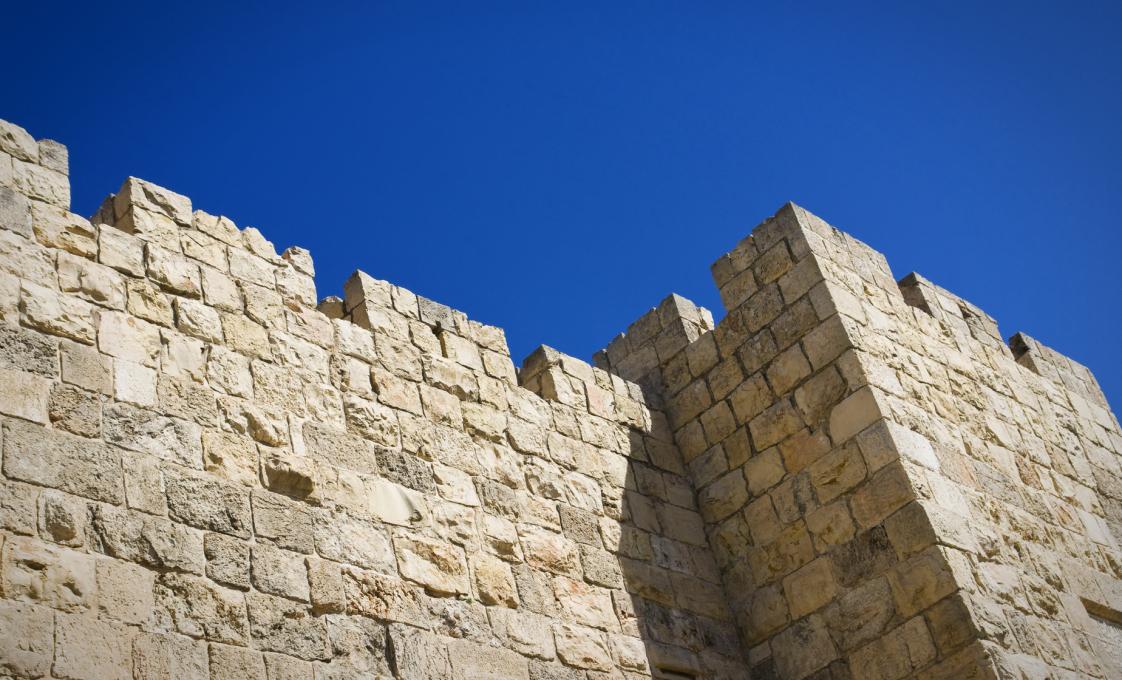 This full day tour visits two of the major religious sites in the world.

Thousands of years and millions of memories. That's what you'll experience when you visit some of the most important religious sites in the world during this full-day exclusive excursion to Jerusalem and Bethlehem.

After meeting your professional guide on the pier in Haifa, you will set out on the approximately 70-minute drive to Jerusalem and some of the most sacred sites in the Holy Land. Upon arrival in Jerusalem, a photo stop will be made from atop the Mount of Olives.

Next you will visit the nearby Church of All Nations, also known as the Basilica (or Church) of the Agony, and the Garden of Gethsemane. The Basilica, which is Roman Catholic, was consecrated in 1924 and is decorated with mosaics donated by each of the countries that also contributed to construction of the Basilica itself. The altar enshrines a section of bedrock, known as the Rock of Agony, where Jesus is said to have prayed before his arrest. The current church rests on the foundations of two earlier ones, a 12th century chapel and a 4th century basilica. The garden of Gethsemane is the site where Jesus prayed and his disciples slept on the night of his betrayal and arrest. According to the Eastern Orthodox Church tradition, Gethsemane is the garden where the Virgin Mary died before her assumption on Mount Zion.

Enter the Old City of Jerusalem through the Dung Gate to see the Western Wall, which is actually part of the supporting wall of the Temple Mount. The only part of the wall that has not been hidden by construction, the Western Wall has remained intact since the destruction of the Second Jerusalem Temple in 70 A.D. The Second Temple, which was built in 517 B.C, was a replacement for the First Temple. The First Temple, which was conceived by King David, was constructed by King Solomon in 950 B. C.

The Western Wall has become the most sacred spot in Jewish religious and national consciousness and tradition by virtue of its proximity to the Temple, home to the Holy of Holies, and from which, according to numerous sources, the Divine Presence never departed. It has become a center of mourning over the destruction of the Temple and Israel's exile, and a place of communion for the memory of Israel's former glory and the hope for its restoration.

Then you will leave the Western Wall Plaza and follow the Via Dolorosa. The Via Dolorosa winds through a maze of narrow alleys in the Muslim Quarter, offering you a fascinating variety of shops and stalls where one can purchase anything from mixed nuts and spices to different kinds of sweets and pastries, vegetables and falafel, along with souvenirs, ceramics, and oriental jewels and cloths. The Via Dolorosa represents a series of events in the life of Jesus from the time he was condemned to death through the third time he fell on his way to his crucifixion.

From Jerusalem, you will travel to the town of Bethlehem, a trip made by the Magi (Wise men) many years ago. While in Bethlehem, you will visit the Church of the Nativity, possibly the oldest continuously operating churches in the world. The structure is built over a grotto that tradition marks as the birthplace of Jesus of Nazareth and is considered sacred by followers of both Christianity and Islam.

The current Basilica was rebuilt in 565 A. D. under the order of Emperor Justinian I. The compound surrounding the Basilica has been expanded over the years. Greek Orthodox, Roman Catholic, and Armenian Apostolic authorities administer the church jointly. The structure is actually a combination of two churches, with the Grotto of the Nativity, where Jesus is said to have been born, underneath. As wait times to enter the grotto can be more than 3 hours long, a visit to the grotto is not included in this tour.

After your visit to the Bethlehem, you will return to the port.

Please Note: Vehicles available for this tour accommodate groups of up to 45 guests maximum. Groups with more than 22 guests may be accommodated upon request. Please take this information into consideration when booking.

Bethlehem is part of the Palestinian Authority. Our guides in Israel, who are Israelis, are not allowed to escort tourists into Bethlehem. For the Bethlehem portion of your tour, you will have a local Palestinian guide to escort you. The cost of this guide is included. If traveling in any vehicle smaller than a coach, you will also need to change vehicles for the Bethlehem portion of the tour. A mandatory stop at a gift shop in the Palestinian Authority area is required as part of this visit. Purchasing is not required.

We are experts in providing exceptional shore excursions. We understand that in today's fast paced world, vacations have become an increasingly important way to relax, reconnect with family and friends, and experience new and interesting places. With this in mind, we provide the highest quality tours by performing extensive research, and detailed reviews. While other companies also offer excursions, we strongly believe our expertise and approach set us apart. The large cruise lines sell shore excursions - typically in very large groups visiting high traffic sites. We focus on smaller groups visiting more interesting and authentic locations using more personalized local operators. While the cruise lines are experts in delivering cruises, we are experts in delivering shore excursions.

Our Approach
We believe quality service is not only highly valued by customers, but ultimately leads to better experiences and higher satisfaction. Unlike the cruise lines and other tour companies that rely almost entirely on websites, we encourage customers to call us. We want to invest our time answering your questions, providing input, and selecting the excursions that best meet your needs.

Our Tours
Our goal is to provide customers a wide array of exciting, appealing, and enriching tours. For those customers who prefer to travel in smaller groups with more personalized service, we offer a wide variety of small group tours around the world. These tours generally range in size from 2-12 people compared to larger tours which can number up to 50 people. While exploring the destinations and ports on this website, feel free to search for these "Small Group Tours". For those customers interested in private tours, we offer many outstanding excursions that allow you to travel with your party alone and, in many cases, to fully customize your tour. Search for "Private Tours" if you are interested in this experience. Our "Scenic" tours provide up close and personal access to some of the most spectacular natural environments on Earth from majestic glaciers in Alaska to spectacular reefs in the Caribbean. Our "Cultural" tours allow customers to experience local customs, entertainment and culinary delights ranging from tribal dances in Alaska to an outstanding local meal in Santorini, Greece. Our "Active" tours offer a multitude of exciting and adventurous ways to experience our destinations. Our customers can kayak the turquoise waters of the Caribbean, hike to a spectacular waterfall in Hawaii, or bicycle through quaint villages in France. Our "City" tours allow travelers to see the highlights of great cities around the world with unique insights provided by our expert tour guides.

Our People
In our experience, exceptional travel experiences are almost always delivered by exceptional people. With that in mind, we utilize a comprehensive approach to select and employ the leading tour guides and tour providers around the globe. We hold our people to very high standards which we measure by our comprehensive Quality Control process and, most importantly, by our customer feedback, which we will actively seek from each of our customers.

Our Owners
Shore Excursions Group is owned by seasoned travel executives possessing extensive experience across many sectors within the travel industry.

Michael Bonner
Mr. Bonner has over a decade of experience working in the cruise industry in a variety of roles for both Royal Caribbean Cruises Ltd. and Viking River Cruises. Most recently, Mr. Bonner was the Chief Operating Officer for The Scholar Ship, a Royal Caribbean program aimed at providing college students onboard educational programs in conjunction with enriching shore excursions around the world. Mr. Bonner also helped co-manage Viking River Cruises U.S. Operations, and he ran the corporate, strategic, and deployment planning functions at Royal Caribbean. While at Royal Caribbean, Mr. Bonner was responsible for forming Royal Celebrity Tours, Royal Caribbean's land-based tour operation in Alaska, which takes cruise passengers on multiple day tours through the interior of Alaska either before or after their cruises. Prior to working at Royal Caribbean, Mr. Bonner was a consultant for Booz Allen & Hamilton.
Less
from $80.00 (USD)
Per Person
Contact Us
Tour Type
Private
Group Size
Private
Activity Type(s)
Cultural
Tour Duration
10 Hours
Activity Level
Moderate
Tour Leaves From
Cruise Ship Pier
Food/Beverage Provided
Not Included
Special Instructions
As you will be visiting religious or memorial sites, your head, shoulders and knees must be covered. Comfortable, sensible walking shoes, sun glasses and sun screen are recommended.
Restrictions
There is approximately 2 hours of walking, some of it strenuous with steep steps to negotiate in the churches. The order of the site visits may vary.
Terms & Disclaimers